A goalkeeping masterclass from Aaron Ramsdale helped Arsenal to a 2-0 Premier League win at Leicester on Saturday as the in-form Gunners climbed to the cusp of the top four.

Gabriel and Emile Smith Rowe gave the visitors a comfortable first-half lead but only Ramsdale’s heroics denied the Foxes a sniff of a comeback at the King Power Stadium.

Mikel Arteta’s team extended their unbeaten run in all competitions to nine games and moved fifth, level on 17 points with fourth-placed West Ham, and three ahead of Leicester, who drop to 10th.

Brendan Rodgers’ men had won their last four games in all competitions to recover from a slow start to the season.

But it was Arsenal who maintained their momentum after recovering from their worst start to a league campaign in 67 years.

Arteta’s men were bottom of the table after three games, but have since moved ahead of Manchester United and Tottenham in the battle for a place in the top four.

Arsenal never looked back after a stunning start.

The Gunners had only scored once away from home in the league but grabbed an early lead through centre-back Gabriel.

The Brazilian scored his first goal of the season in the fifth minute when he met Bukayo Saka’s inswinging corner with a glancing header into the far corner.

Smith Rowe doubled the lead in the 18th minute with his fourth goal of the season when he tucked away a loose ball in the area after Luke Thomas’ poor clearance.

Leicester had scored at least twice in each of the past five matches in all competitions but Ramsdale, who joined Arsenal from Sheffield United earlier this year, was in inspired form to prevent them adding to their goal tally.

He tipped wide Kelechi Iheanacho’s long-range effort and made a remarkable save just before half-time, parrying James Maddison’s free-kick onto the post before Jonny Evans hit the woodwork on the rebound and Thomas Partey cleared the ball off the line.

The 23-year-old continued to keep Leicester at bay in the second half as he denied substitutes Ademola Lookman and Harvey Barnes.

Thomas and Barnes went close but Arsenal almost made the game safe when Kasper Schmeichel kept out Pierre-Emerick Aubameyang’s shot at the far post from a corner. 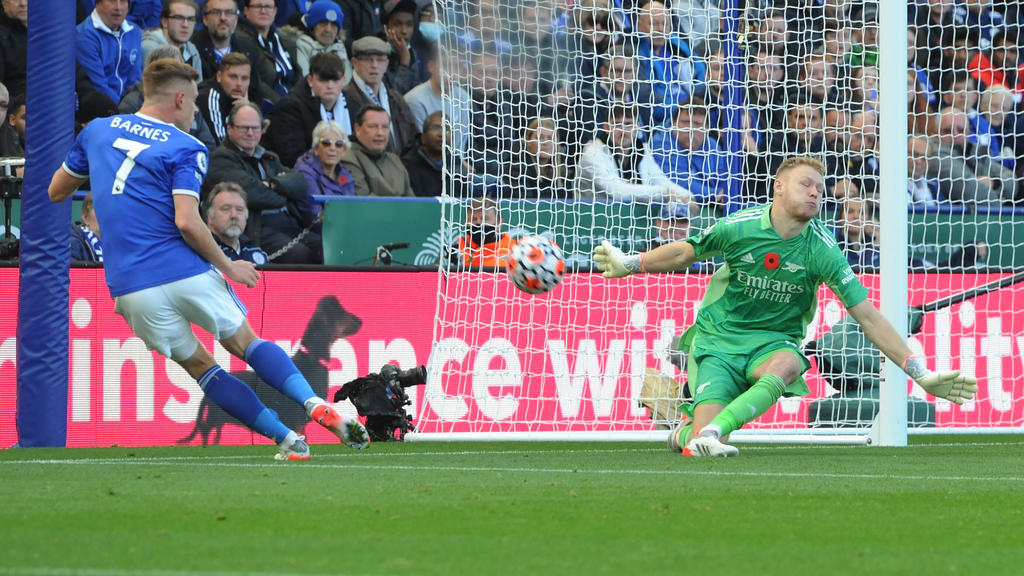